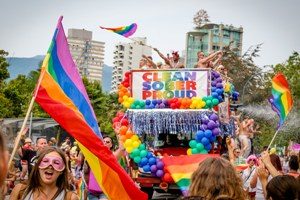 United Kingdom is aiming to attract its tourists by participating in Vancouver Pride Parade. The representatives of United Kingdom are aiming to give a bump to its economy by attracting tourists from the U.S. who value lesbian, gay, bisexual, transgendered and queer and other (LGBTQ+) rights.

They are doing this by taking part in more LGBTQ+ events in the Americas this year in the hope that this visibility will remind parade-goers that the U.K. is an accepting place for LGBTQ+ people. The U.K. has allowed same-sex civil partnerships for more than a decade, and same-sex marriage 2014 in England, Wales and Scotland. In 2002, same-sex couples were granted equal rights to adopt. Transgendered people were able to legally change their gender in the U.K. starting in 2005.

British High Commissioner to Canada Susan le Jeune d’Allegeershecque said that the variety of activities and events being organized by our teams across Canada — from Vancouver to Montreal — are a clear demonstration of the importance the U.K. places on equality and LGBTQ+ rights.

The campaign of U.K. features what it calls its first-ever LGBTQ+ Founders’ Trade Mission — an initiative that brings nine U.K.-headquartered companies to New York for a program timed to coincide with World Pride, and is aimed at accelerating business growth in North America for LGBTQ enterprises.

The country’s government leaders are now joining with representatives from its Foreign Commonwealth Office, its Department for International Trade and VisitBritain to organize the U.K.’s widest-ever array of LGBTQ+ business and public-engagement events.

This will be the first year, for example, that the U.K. government representatives will be marching in Calgary’s Pride parade, an event that takes place Sept. 1. Vancouver’s Pride parade is set for Aug. 4.

Paul Gauger, senior vice president of the Americas, for the British tourism body VisitBritain that showcasing Britain throughout the Pride season in these cities helps highlight the destination [of the U.K.] as a welcoming, inclusive, open and accepting place for all people to visit and enjoy.