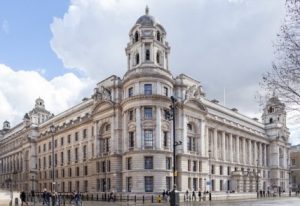 The Hinduja Group and Obrascon Huarte Lain Desarrollos or OHLD recently announced a partnership extension with luxury hotel group Raffles Hotels and Resorts. Back in the year 2017, Raffles hotels signed an agreement to manage a 125-room and suites flagship hotel in London. This hotel is located at the historic Old War Office building in London.

Recently, the same agreement has been further extended to officially put Raffles group in charge of operating 85 residences at the iconic destination in Whitehall. This would also be the very first Old War Office Residences by Raffles Hotels and Resorts in the United Kingdom and Europe.

The project has been formally named as, ‘The OWO’, by The Hinduja Group and OHLD during the signing of Raffles. The naming and signing took place in a recent topping off ceremony which has been marked as an important milestone in the process of bringing the project to life. The brand new name uplifts the modern spirit alongside maintaining the classic essence of the Old War Office.

The building was originally constructed in 1906 and has witnessed various remarkable events in history. It has also been used as headquarters by renowned figures like Winston Churchill and Lord Kitchener among others.

The Hinduja Group alongside their partner OHLD is providing special purpose vehicles to develop the project. The overall design has been made by UK-based EPR Architects and the interior designing has been done by the luxury residential building designer Thierry Despont from New York. Meanwhile, the designing of the residences has been undertaken by 1508 London.

Ardmore Group is the principal contractor of the project. The Toureen Group is looking over the structural works with Elliot Wood as the structural engineers. Madani Sow, the former CEO and UK Chairman, Bouygues Construction, has been appointed at the Chief Executive Officer. He would be responsible for looking over the development management of the project. The property is all set to open by early 2022.