Famous European destinations are not interested in tourists anymore 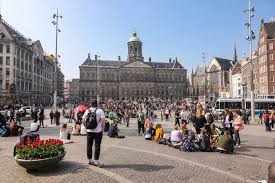 Hotel owner Verena Lobisser explains that tourists coming to her village, on the edge of a glassy lake nestled into the Austrian Alps, stop her and ask her to take pictures frequently.

Sepp Krumböck, who manages a boat rental outfit, remembers the morning he identified a camera-equipped drone was floating next to his bedroom window.

Other residents narrate stories of tourists who let themselves into private timber-framed homes to explore in and around or use the toilet.

“It’s a catastrophe,” Lobisser said. “Many visitors seriously think this is a theme park.”
That’s an emotion shared in cities and towns all over Europe. Some of the top destinations of the world confront themselves with a rush of tourists that has exploded beyond what they can handle right now. Even in places where the local economy is mainly tourism dependent, fights are growing – and there are burgeoning efforts to keep people away.

Venice (25 million annual visitors) has stated that it will bring in an “entrance fee” in 2020 of up to $11 for day-trippers. (A tourist tax is already included in hotel fees for those who stay overnight.)

Barcelona (30 million visitors) has stopped new hotels in the city center and limited the size of groups allowed in its La Boqueria market.

Amsterdam (19 million visitors) has been particularly forceful. It has banned the increase of new hotels and tourist shops, its hotel tax and imposed on-the-spot fines for public urination or drunkenness. In 2020, it will stop tours of the red-light district.
Hallstatt might not have the same name-recognition as Venice or Amsterdam. However, if you Google up “Austria,” you’ll see the village governs the images that pop up. It looks more like Arendelle in Disney’s “Frozen,” with the bell tower of the Lutheran Church standing in for the central tower of Queen Elsa’s castle.