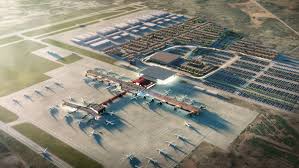 In the last five years tourists to Iceland have more than tripled and the airport officials three years ago estimated 8.8 million annual travellers by 2025.
The airport operator is working on $1 billion expansion and expect to handle 10 million people this year.

The country’s state-owned airport operator had to rip up its passenger traffic projections due to record number of tourist rushing to Iceland.

The Keflavik International Airport has become one of Europe’s hottest airports. It is the entry points for most of the tourists to the country and is currently undergoing $1 billion expansion to accommodate the massive number of travellers and airlines.

ISAVIA, Iceland’s airport operator in the year 2015 stated that Keflavik would be handling 8.8 million travellers a year by 2025.

The airport is already stuffed with the maximum capacity at some point of the day.
In 2017, there will be more than 10 million passengers and more than 17 million annual travellers in the year 2030.

Due to undeveloped land in the area surrounding the airport there will not be major issues as compared to densely-populated parts of the United States or other countries.

In 2016, Iceland had more than 2.2 million foreign visitors as per the Icelandic Tourism Board. This was more than triple the number five years earlier.

The expansion will have 26 new gates as per ISAVIA, 16 of the gates will be connected to the airport. There will also be an increase in the retail and dining space in the Keflavik airport.

This will provide a new point of recreation for travellers waiting in the long lines for food or coffee at the concession stands.As per the airport official the project will be funded by airlines landing fees, concession and other non-aeronautical revenue and loans.