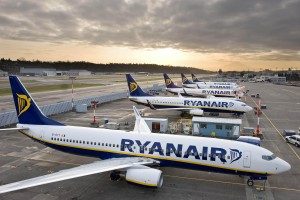 Labour unions in Portugal, Spain, Belgium and Italy claim that employees are hired by Ryanair or its subsidiaries under contracts governed by countries where they are not based, reducing their leave allowances, causing wage disparities and impeding the workers’ access to state benefits.

In response, the Dublin-based airline published on its website salary slips for June, arguing that pilots and cabin crew are fairly paid in Portugal, Spain and Belgium, the three countries most affected.

The company says that all 50,000 passengers affected by the cancellation of 600 flights on Wednesday and Thursday were given alternative flights or offered full refunds in the past days.

Spain was the country with most cancellations, with almost one out of four of the company’s daily flights halted Wednesday and Thursday.

Authorities in Spain required for the company to ensure all flights to the Balearic and Canary Islands, at least 35 percent of domestic flights and 59 percent of international ones.

The two main unions representing pilots and cabin crews in Spain said negotiations with Ryanair over the contracts of more than 4,000 cabin crews across Europe had failed.
In Italy, protests were planned at airports, with unions saying they want a collective contract that recognizes workers’ rights and that Ryanair has refused to negotiate.

At three Portuguese airports, 36 of 45 scheduled Ryanair flights were cancelled, and the airline’s check-in areas were largely deserted. Ryanair had said before the strike that as many as 50 of 180 scheduled flights from and to Portugal could be cancelled during the strike period.

Bruno Fialho, of Portugal’s Civil Aviation Cabin Crew Trade Union, urged the government to intervene in the dispute, claiming the airline is “trampling on Portuguese laws” by not respecting the labor rights of local staff.

The airline responded Thursday by warning some 100 pilots and 200 cabin crew members that they could lose their jobs as it cuts its Dublin-based aircraft fleet from 30 to 24. Ryanair operates a fleet of over 450 aircraft from 87 bases.

The demands come as Irish pilots have held rolling strikes that hit bookings and consumer confidence in Ireland, according to Ryanair.