Norwegian Increases Transatlantic Flights to Ireland from North America by over 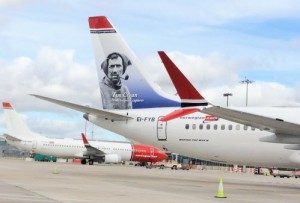 All flights between North America and Ireland are operated by brand-new Boeing 737 MAX aircraft that feature up to 189 leather seats, which are currently being upgraded to a new slimline seat that will offer passengers enhanced comfort and greater space.

Norwegian’s increased 2019 summer schedule from Ireland has 40 weekly transatlantic departures and is now available to book for travel from 31 March 2019, as follows:

To Dublin – 28 transatlantic flights per week from:

Hamilton/Toronto – The brand-new daily service to Canada commences on 31 March 2019, and will mark the first direct flight between Hamilton and Dublin.

Providence – Norwegian will increase flights from Providence, Rhode Island to a daily service next summer, up from five flights per week.

Stewart, Greater New York City – Customers will continue to benefit from twice-daily flights on this popular route following the introduction of a daily morning departure in April.

To Shannon – nine transatlantic flights per week from:

Stewart, Greater New York City – Norwegian will increase its summer service next year from three to five flights per week due to strong passenger demand.

Providence – Business and leisure travelers will continue to benefit from four flights per week from the heart of New England next summer.

To Cork – three transatlantic flights per week from:

Providence – Norwegian will continue its seasonal service from Providence to Cork with three flights per week. This remains the only flight between Cork and the U.S.

“We are excited to increase our transatlantic flights next summer to meet demand and continue expanding our presence in Ireland. The market presents a clear opportunity to deliver more high-quality flights at lower fares for consumers on both sides of the Atlantic,” said Thomas Ramdahl, Norwegian’s Chief Commercial Officer.

All customers on Norwegian’s transatlantic flights to the USA from Dublin and Shannon benefit from the U.S Preclearance facilities at each airport. Norwegian customers landing in the US will be treated as domestic passengers, allowing for a quicker transition through the airport upon arrival.