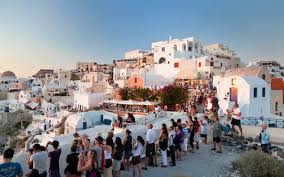 Greece, along with other leading European tourism destinations, will be working on addressing the sector’s main challenge i.e. overtourism.

The head of the Greek Tourism Confederation (SETE), Yiannis Retsos, said that the issue of overtourism features at the top of the European tourism industry’s agenda.

Retsos said that SETE was working with other sector bodies across Europe on relevant policies and added that the German Tourism Association has already carried out studies and research which found that tourist flows to Europe are expected to increase and inbound travelers from China are expected to reach 100 million in the coming year.

Europe is currently the world’s leading tourism destination. One of Europe’s leading destinations welcoming over 30 million visitors in 2018, Greece is also witnessing the impact of overtourism in Santorini and in certain Athens neighborhoods due to growing short-term rental phenomenon. Athens alone saw over 5 million tourist arrivals this year.

The UNWTO said that the number of global travelers has gone from 25 million in 1950 to more than 1.3 billion in 2017, and predicted that the industry is expected to grow by 3.3 percent per year by 2030, when an estimated 1.8 billion tourists are set to travel worldwide backed by stronger incomes, increased social and cultural exchange, and the evolving sharing economy.

To address overtourism, the UNWTO in September released the report titled “Overtourism – Understanding and Managing Urban Tourism Growth Beyond Perceptions”, proposing a series of measures aimed at understanding and managing the ever-growing number of visitors in popular cities: