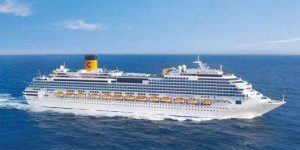 Nearly every cruise ship in Europe is still using high-polluting fuels that harm the environment and human health, prompting calls for ports to ban them altogether.

Of the 77 vessels tested by German environmental watchdog Naturschutzbund Deutschland (NABU), just one had avoided using toxic heavy fuel oil the group described as the “dirtiest of all fuels”. In the UK, cruise ships stopping on the Thames have been a target for local campaigners as each emits the same amount of toxic gases and particulates as 700 lorries. As there has been relatively little progress in reducing air pollution from shipping in recent years, Nabu has called for action from European ports to prevent these ships from harming people in port towns.

“With friendly words you will not get any changes, so port cities and coastal communities are now asked to ban dirty ships – like Norway is doing for some of their fjords – to protect the people and the environment.” Heavy fuel oil is the lowest grade product to emerge from refineries, and its use means that an emission of harmful gases from shipping is very high.

Global estimates suggest ships are responsible for 15 per cent of nitrogen oxides and 8 per cent of sulphur gas worldwide. These gases have been linked with a range of health problems including asthma, heart disease and cancer. As shipping lanes open up in the Arctic due to global warming, environmental groups have called for heavy fuel oil to be banned in an effort to protect polar communities and ecosystems from oil spills and black carbon emissions. There has been some success in these efforts, with the International Maritime Organisation agreeing to move towards such a ban.

However, closer to home there has been less progress. So far the new build AIDAnova is the only cruise ship to be powered by cleaner liquefied natural gas (LNG).

Dietmar Oeliger, head of transport at Nabu said the use of LNG reduces harmful air pollution significantly, and residents of port cities and coastal areas will be allowed to breathe cleaner air.

A spokesperson from the Cruise Lines International Association (CLIA) said the rankings released by Nabu used a “non-scientific approach” and did not represent the true state of play.

Nabu and CLIA pursue in principle the same objectives – to lower emissions and protect the environment. They also said that the objectives deviate is in impatience and realism in how fast the industry aims to implement energy efficiency measures, and the availability and cost for such measures.

They noted that heavy fuel oil had not been used without exhaust gas cleaning systems in the North and Baltic Seas since 2015, and in the worldwide cruise ship fleet nearly half were equipped with so-called ‘exhaust after treatment systems’ to reduce pollutants. Furthermore, the spokesperson pointed to CLIA’s commitment to LNG ships as an example of investment in environmental technologies.

However, Nabu also warned that LNG is not the “salvation” of the shipping industry, as it is still a fossil fuel and their research suggests it is will not make a significant dent in the sector’s greenhouse gas emissions.

CLIA said it was committed to seeking “environmentally friendly solutions for our ships that make environment and business go hand in hand in the future”.