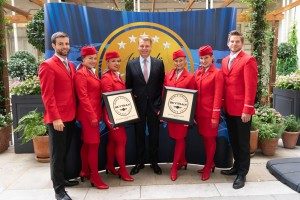 Once again Austrian Airlines achieved top rankings this year in the renowned SKYTRAX World Airline Awards 2018 which were presented in London on July 17, 2018. Austria’s national carrier is the European champion for service for the fifth straight year. The Austrian Airlines team clinched the title of “Best Airline Staff Service in Europe”. This award is in recognition of the performance of both the board crew and ground staff. In addition, Austrian Airlines won the world championship title in the category “Best Business Class Onboard Catering”. In collaboration with its catering partner DO & CO, Austrian Airlines was thus given the gold medal for the world’s best business class catering.

“We are extremely pleased with the fact that we are the European champion for service for the fifth consecutive year”, says Andreas Otto, Chief Commercial Officer of Austrian Airlines, who personally accepted the awards in London on behalf of Austrian Airlines. “As to the world championship in catering, we will first have to see if any other airline will be able to duplicate this achievement. We would like to thank our customers for this vote of confidence and our employees who made this success possible in the first place on the basis of their untiring dedication”, he adds.

The World Airline Awards are considered to be a global measure of outstanding performance in the airline industry. Rather than being decided upon by a jury, the awards are based on the results of the world’s largest customer survey in the airline industry, which is carried out by the public opinion researcher Skytrax every year. About 20 million passengers from more than 160 countries across the globe are surveyed each year.