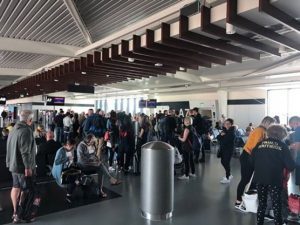 A technical hitch halted all plane refuelling at Manchester Airport leading to cancellation of 86 flights that affected 13,000 passengers. The problem first emerged at around 2 pm, Sunday afternoon as passengers took to social media to report that they were stuck on stationary aircraft. Some reported waiting for three hours on board before learning that their flight was cancelled.

As per unconfirmed reports the problem was with the electricity supply which powers the fuel delivery system at the airport.

They were disembarked and many of them were being put in hotels around the airport, hopeful of another departure in the morning.

Passengers reported being stuck on aircraft at airports around Europe, awaiting a return to Manchester. Police could be seen stationed in the terminal buildings in case tempers frayed.

A Manchester Airport spokesman said: “Due to a power issue this afternoon there is currently an issue with the fuel supply at the airport. Engineers are currently on site to fix the issue and we are working with airlines to try and minimise the impact.”

Last night engineers were still trying to fix the issue, which may be connected to a power outage earlier in the day.

Passengers complained that they could be informed earlier. The Airport currently has no timescale for resolving the incident.