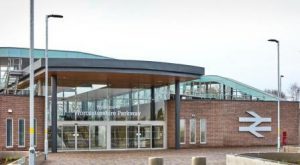 England’s Worcestershire finally saw the opening of its first new railway station in nearly 100 years on Saturday, the 22nd February 2020. The planning for the Worcestershire Parkway station began about 30 years ago. The execution and launch were followed by years of delays and setbacks due to various unavoidable circumstances. The first train of the Great Western Railways arrived at the station on 8:29 AM and headed towards London Paddington.

On Saturday morning, a group approximately 50 people consisting of railway staff, councillors and passengers gathered at the station to witness the ultimate moment of Worcestershire’s £22m station coming to life.

The brand new station would be served by Great Western Railway and Cross Country Trains. The station would witness near about 60 train services every day and allow travelling to places like London, Cardiff and Nottingham. The station is updated according to modern standards and would feature 500 car parking spaces and electric charging points. The expected number of passengers availing railway services in the station is nearly 250,000 per year.

Matthew Golton, interim managing director, Great Western Railway, said he is excited for the opening as it took a lot of effort and 30 long years of planning to open the doors of the station. He is of the opinion that the station would place Worcestershire in an important position on the map from a railway connectivity front. He also considers Worcestershire as an important county and thinks that the station would immensely help in making in and out communication of the region much easier.

Nigel Huddleston, MP, Mid-Worcestershire further added that Worcestershire is a great place to reside in. He thinks connecting the place to other areas via railways was a key point in the expansion of the county. He also shared how the railway station would positively impact in boosting the business economy and tourism of Worcestershire.