VisitScotland: Out with the old, in with the new (year) 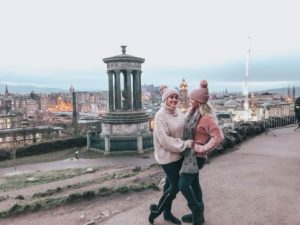 Two LGBTQ+ influencers – with a collective social media following of almost 142,700 – experienced the unique spectacle of Edinburgh’s Hogmanay as part of an exciting project with VisitScotland and the Scottish Government, to promote Scotland’s winter festivals.

Whitney and Megan Bacon-Evans immersed themselves in the capital’s unique festivities as people from near and far welcomed in 2019 with a parade and giant Street Party that included music, live bands and DJs.

On 30 December, the pair joined the spectacular and unforgettable family-friendly Torchlight Procession down Edinburgh’s Royal Mile, alongside pipers, drummers and torch bearers, to the historic Holyrood Park.

On reaching the Park, the torchbearers then created the distinctive outline of Scotland around 14 wicker sculptures, set ablaze to form the fiery heart of the country. Each sculpture represented a region of Scotland as part of the #ScotArt project, providing a spectacular finale to the Year of Young People 2018.

On New Year’s Eve, they interviewed DJ Trendy Wendy to find out more about the LGBTQ+ scene in Edinburgh, ahead of her set at the Street Party and visited Calton Hill, before revelling in the biggest party of the year in the heart of Edinburgh.

They also experienced the Ceilidh Under the Castle and enjoyed plenty of traditional food and drink, music and dance to keep them going well into the new year.

On New Year’s Day, the pair joined the Loony Dookers – an annual tradition to take a dip in the Firth of Forth. Those brave enough to brace the cold came in all sorts of fancy dress to run into the freezing water to raise money for charity.

Later that day, the pair watched Scottish music band Capercaillie bring a traditional Scottish knees-up to McEwan Hall. The band invited guest musicians to join them to bring the sounds of the European family of nations together in an afternoon of shared cultural celebration.

Known through their social media channels as Wegan, the duo travelled from their home in south-east England, to take part in the world famous Hogmanay celebrations in Edinburgh.

They said: “We thoroughly enjoyed our trip to Edinburgh for Hogmanay. There is so much tradition along with so many activities that truly makes you feel immersed in the culture.

“It was such a great welcome to Edinburgh to walk alongside 1000’s with torches lit and bagpipers behind us. We loved bringing in the new year with a kiss and watching the fireworks over Edinburgh Castle, followed by Franz Ferdinand singing Auld Lang Syne.

“To our surprise, we managed to bump into a follower who had taken part in Loony Dook dressed as a banana! Watching the super-talented Capercaillie band was a fantastic way to end our trip.

“We were honoured to be hosted by VisitScotland and it’s great to see a tourism board acknowledging and embracing our wonderful community.”

“We were delighted to welcome Whitney and Megan to Edinburgh’s Hogmanay this year.

“This event is renowned the world over and I am delighted that they were able to experience this annual spectacle for themselves and show their followers across social media just why Edinburgh – and indeed Scotland – is such a welcoming place to visit.

“As Scotland’s most visited city, Edinburgh’s stunning beauty, rich history and world-famous festivals attracts millions of visitors from around the world every year. Tourism is the heartbeat of the Scottish economy, causing a ripple effect which touches every industry and community, creating employment and economic growth.

“Last year, an impact study undertaken by the organisers of Edinburgh’s Hogmanay found that the event generated £39m for Edinburgh’s economy and attracted over 165,000 visitors from over 80 countries.

“The event also acts as a gateway to the rest of Scotland, with visitors to Edinburgh’s Hogmanay spending an average 4.3 nights in Scotland in total*.

Wegan set up their blog in 2009 to document their lives, have memories to look back on and because they felt there was a lack of visible lesbian role models. Whitney, from Hawaii and Megan, from the UK, married in 2017 and now have 44,274 subscribers to their YouTube channel, a combined 53,600 followers on Instagram, 6.9k followers on Facebook, 10k on tumblr and 28.6k followers on Twitter. A total of 45% of their audience is from the UK.

Launched in July last year, Scotland: Life has brought together a variety of different videographers, travel bloggers and YouTubers with people who live, work, study and play in the country.

This unique project has seen global vloggers and Instagrammers experience the true Spirit of Scotland through the eyes of the people that have made the country their home. From a scallop diver in Mull to parkour athletes in Edinburgh, Harry Potter fans to an Outlander herbalist, our locals have brought Scotland to life in a special way, showcasing inspirational untold stories about this fascinating country.