Visa exemption for citizens of the UK, Germany, Spain and Italy for visiting Vietnam 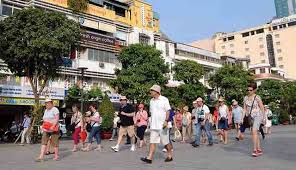 Citizens from the UK, France, Germany, Spain, and Italy are enjoying visa exemptions for the next three years, from the beginning of July this year. The policy and tourist promotion activities create incentives for businesses to work on longer-term market expansion plans, contributing to improving the tourism business environment.

In July 2015, Vietnam first offered visa waivers to citizens from the five European countries and decided to extend the policy after its expiration.

According to a study by the UNWTO and the WTTC on the impact of visa exemptions in ASEAN countries, the number of tourists increased by 3% to 5.1%. At the same time, the number of direct jobs in the tourism industry will increase from 1.6% to 3.1%.

Over the last three years, the number of tourists from Western European markets has grown steadily by more than 10%. The Tourism Advisory Board (TAB) has also carried on separate studies on the impact of visa exemptions for visitors from the UK, France, Germany, Spain and Italy. Vietnam’s unilateral visa exemption is truly important, helping increase the number of tourists from these markets by 10.1%.

The visa exemption policy was considered to be one of the knots limiting the development of tourism. However, the policy has contributed to increase the number of direct and indirect jobs in tourism, increase revenue from tourism. It will also help in developing the economy because the investors and traders from developed countries will have easier access to the Vietnamese market.