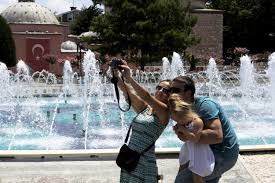 British holidaymakers are coming back to Turkey in droves with the lira reaching an all-time low against the pound.

In the past 12 months, the Turkish currency has dropped 35 per cent, with the rate reaching £1 to 6.83TRY. This is great news for the British travellers as the ailing pound flourishes against local currency.

Seats on direct flights from the UK to Turkey are also back to 94 per cent of what they were in 2015. Tour operator Thomas Cook has reported a 63 per cent year-on-year increase in bookings to Turkey during this year. Antalya has overtakenMallorca’s Palma airport as the company’s most served for the UK customers.

In 2015, Turkey was the sixth most-visited country in the world, attracting nearly 42 million foreign visitors. In 2016, this figure plummeted to 25 million, following a series of terrorist attacks and an attempted military coup.

Barring the area close to the Syrian border and the city of Diyarbakir, the Foreign and Commonwealth Office (FCO) have now marked Turkey as green – safe to visit – including Istanbul.

Russians have also provided an unexpected boost to Turkey’s tourism industry, in spite of the downing of a Russian warplane by the country in 2015. This year is expected to be a record year for Turkey with six million Russians expected to visit the country.