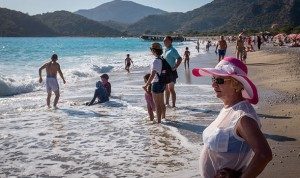 The Turkish lira has plummeted by 35 percent during the past 12 months, reaching 0.15 against sterling. Anyone changing £100 would get more than 650 lira.

Thomas Cook has reported that a 63 percent year-on-year increase in bookings to Turkey during 2018 and Antalya has overtaken Spain’s Palma de Mallorca as the company’s most served airport for UK customers.

The firm believes the recent spell of warm weather has resulted in many customers delaying decisions about their summer holidays, which has reduced the ability of travel firms to raise prices.

Anth Mooney of Thomas Cook Money said that the lira is at an all-time low against the pound, and thanks to the heatwave there’s a lot of very good value holiday deals on offer, so there’s never been a better time to holiday in Turkey.

The lira’s fall follows growing tensions between Turkey and the US, with president Donald Trump reviewing the country’s duty-free access to the US market. Although the pound has increased in value against the lira, it has struggled against some other popular currencies. Since April it is down 3 percent against the euro and 10 percent against the US dollar.