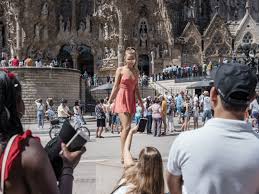 Bonazzon, an artist who paints and sells watercolours up near San Marco Square, has a ringside seat to the selfie-posing, ice-cream-licking hordes who roil their way daily toward the Doge’s Palace, and he readily agrees that tourism is killing his hometown.

Yet when he heard that Venice Mayor Luigi Brugnaro had, in the run-up to a busy weekend at the beginning of May, installed checkpoints intended to block arriving visitors from especially crowded thoroughfares (while allowing locals through), Bonazzon was dismayed. “Yes, they should control the tourists,” he says. “But they shouldn’t close Venice. We’re a city, not a theme park.”

That’s a refrain echoing in a growing number of European cities. The neoclassical gems that once made up the grand tour have been stops on package tours since the 19th century.

But it’s only over the past decade that the number of travellers to these and other must-see destinations risks subsuming the places. Around 87 million tourists visited France in 2017, breaking records; 58.3 million went to Italy; and even the tiny Netherlands received 17.9 million visitors.

It’s happening nearly everywhere. Asia experienced a 9% increase in international visitors in 2016, and in Latin America the contribution of tourism to GDP is expected to rise by 3.4% this year. Even a devastating hurricane season couldn’t halt arrivals in the Caribbean, where tourism grew 1.7% in 2017. However, the U.S., on the other hand, has seen foreign tourism drop, partly because of a strong dollar.

But Europe is bearing the brunt of this tourist influx. Of the 1.3 billion international arrivals counted by the U.N. worldwide last year, 51% were in Europe–an 8% increase over the year before. Americans, in particular, seem drawn to the perceived glamour and sophistication of the Old Continent. More than 15.7 million U.S. tourists crossed the Atlantic in 2017, a 16% jump in the space of a year.

With tourism in 2018 expected to surpass previous records, frustration in Europe is growing. This past spring witnessed anti-tourism demonstrations in many cities throughout Europe. On July 14, demonstrators in Mallorca, Spain, conducting a “summer of action” greeted passengers at the airport with signs reading tourism kills Mallorca.

Now, local governments are trying to curb or at least channel the surges that clog streets, diminish housing supplies, pollute waters, turn markets and monuments into no-go zones, and generally make life miserable for residents. Yet almost all of them are learning that it can be far more difficult to stem the tourist hordes than it was to attract them in the first place.

Balancing the needs of locals with the demands of tourists is a challenge across Europe but perhaps nowhere more so than in Venice, where more than 20 million tourists crowd the piazzas and canals every year. When the city’s mayor attempted to install checkpoints to potentially shut main thoroughfares to tourists, the initiative was greeted by protests from locals, who saw the surprise measure as an attempt to close the city. “We tried to do something for the city, for the residents,” laments Paola Mar, Venice’s deputy mayor for tourism. “This measure was for them, for their safety. But in Italy, you’re only good if you do nothing.”

Venice has not done nothing. The local government has restricted the construction of new hotels and takeout restaurants, and created a fast lane for residents on public transport. It has a plan in place to ease congestion by diverting foot and boat traffic on exceptionally crowded days this summer, and now employs 22 stewards in vests that read #EnjoyRespectVenezia to prevent tourists sitting on monuments, jumping in the canal, or otherwise misbehaving.

But imposing too many restrictions risks alienating the residents who depend on access to tourist dollars; across the E.U., 1 in 10 nonfinancial enterprises now serves the industry. In Venice, a proposal to ticket the entrance to San Marco Square has run into resistance from shopkeepers. And the subject of restricting cruise-ship access is a touchy one. “You have to know, 5,000 people work with the cruise ships,” says Mar, who notes that the city council has asked the government to move large ships from the San Marco basin. “If we want people to stay in Venice, they have to have jobs.”

And therein lies a hint of what is at stake. Venice has been losing residents for decades, dropping from nearly 175,000 in 1951 to around 55,000 now. The city seems close to uninhabitable in certain areas–its streets too crowded to stroll down, its hardware shops and dentist offices replaced by souvenir stalls. The same cycle threatens Barcelona and Florence; tourism drives locals out of the center, which then leaves even more spaces to be colonized by restaurants and shops that cater to tourists. Annelies van der Vegt understands the sentiment. A musician, she lives in the center of Amsterdam but is tired of finding entire tour groups on her doorstep, gaping at her 17th century house. “I’m thinking of moving to Norway,” she says.

When the residents leave and the visitors take over, what is left behind can lose some of its charm. One day in May, Susana Alzate and Daniel Tobón from Colombia waited on Venice’s Rialto Bridge as first a gaggle of Israeli Orthodox Jews, then a tide of Indian Sufis jostled by. Finally, the couple found a slot on the railing, struck a pose and shot their Instagram story. “It’s beautiful,” said Alzate as she gazed out on the Grand Canal. “But I would never come back. Too many tourists.”