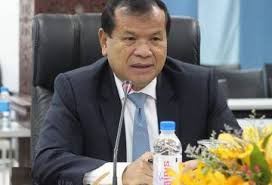 Yesterday, Deputy Prime Minister Hor Namhong explained that the appointment of Tourism Minister Thong Khon as a member of the European Tourism Academy will enhance the initiations to change the country into a world-class tourism destination.

Speaking at the appointment ceremony, Mr Namhong stated that the consolidation of ties between the Ministry of Tourism and the European Council on Tourism and Trade (ECTT) will aid in the transformation.

At the event, Mr Namhong was accompanied by Anton Caragea, president of ECTT.

“I believe that under the leadership of Mr Khon, the cooperation between the council and the Ministry of Tourism will be further strengthened and will help transform Cambodia into a world-class tourist destination,” he said

“I would like to thank the council, especially Dr Caragea, who has always supported Cambodia and considered us a model for the world in tourism.

“Tourism has contributed significantly to the socio-economic development of Cambodia by creating jobs, increasing people’s incomes and making Cambodia the most attractive tourist destination in the world,” he said.

As per the forecasts, 6.2 million foreign tourists will visit Cambodia every year by 2018 and 7 million by 2020.

By 2030, Cambodia will greet an estimated 15 million foreign visitors, bringing in a total of $10 billion and creating 2 million jobs.