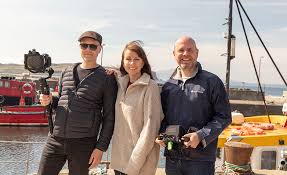 Tourism Ireland has started shooting for phase two of its global advertising campaign. The video recording will be used to develop new TV, cinema and online ads and will reach millions of visitors worldwide. It will be launched for the digital era and will at the same time include lots of short ‘snackable’ content for use on social platforms.

In this second phase of Tourism Ireland’s campaign, locations and attractions will feature in Ireland’s Ancient East and Waterford – including the Farmers’ Market, Waterford Treasures and the House of Waterford Crystal. In early 2020, the ads will go live in Tourism Ireland’s top international markets – Britain, the US, France and Germany – to kickstart the tourism season for 2020. The campaign will then be launched further in other markets, including Canada, Australia, Spain, Italy, the Netherlands and Scandinavia.
Fredrik Lexfors (second left) and Lisa Lexfors (centre), the stars of the campaign; Brian Twomey, Tourism Ireland (second right); and the camera crew, during the shoot at the Famers’ Market in Waterford for Tourism Ireland’s global ad campaign.

“Our ‘Fill Your Heart With Ireland’ campaign is designed to drive continued growth in overseas tourism to Waterford and Ireland and to encourage visitors to travel off-peak,” said Mark Henry, Tourism Ireland’s Central Marketing Director. “We’re featuring locations that are less well-known amongst overseas visitors and focusing on ‘soft adventure’ activities, such as horse-riding, walking and stand-up paddle boarding.” For Tourism Ireland, this is the second phase of first major campaign in seven years; phase one reached an estimated 120 million people in our top markets this spring.

As in phase one, which was developed in autumn 2018, the campaign is being filmed by Swedish director Patrik Gyllström and shows a married couple from Sweden wearing custom-made technology to track their physiological responses to the different locations – demonstrating the heart-filling effect that the island of Ireland has on our overseas visitors!Additional content will be filmed this autumn to ensure coverage of lots of additional locations and activities.