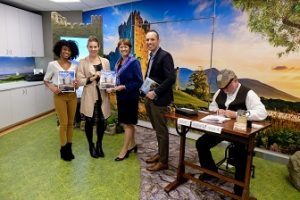 Hundreds of thousands of New York commuters and visitors to the city are seeing a new Ireland promotion, which gets under way this week in Penn Station. It’s part of a two-month campaign being rolled out by Tourism Ireland in conjunction with United Airlines. Penn Station serves more than 350,000 commuter passengers a day, making it one of the busiest passenger transport hubs in the western hemisphere.

The promotion involves an Ireland ‘takeover’ of the United Airlines city ticket office in Penn Station, including:

Also, a calligrapher is on hand, translating commuters’ names into Irish and writing them on a branded United/Ireland bookmark.

The campaign will run until the beginning of 2019 and also includes print, social and online ads – highlighting United flights from New York/Newark to Dublin and Shannon, as well as great reasons to visit the island of Ireland during the winter months.

“We are delighted to partner with United Airlines, to help drive sales for flights to Ireland and continue to grow visitor numbers from the US during the off-season months.” said Alison Metcalfe, Tourism Ireland’s Head of North America. “Our promotion will give hundreds of thousands of New York commuters a taste of the island of Ireland and highlight what makes it a great vacation choice. Our aim is to keep the island of Ireland ‘front of mind’ for American travellers considering a trip and to remind them that it is now easier than ever to get to Ireland.”

Alison Metcalfe continued: “Last year, we welcomed a record 1.8 million visitors from North America to the island of Ireland. And, the growth momentum continues in 2018, with latest CSO figures indicating an increase of almost +13% in arrivals from the US and Canada for the January to September period. We are confident that our strategy for growth and extensive marketing programme, combined with more airline seats than ever before and the superb vacation experience on offer in Ireland, will deliver further record growth in 2019.”