The success story of Greek tourism was informed to the world 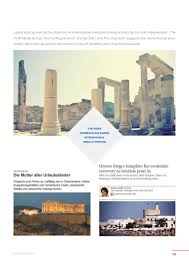 Elena Kountoura, the Tourism Minister of Greece has spread the word on the success story of its tourism at the time of a series of events organized during the World Travel Market 2018 trade show in London last week. Kountoura was invited to a special event organized by the World Travel & Tourism Council (WTTC); the first meeting of the Global Tourism Resilience & Crisis Management Center; and the International Travel Crisis Management Summit (ITCMS).

In the last four years, Greek tourism numbers have raised by 33 percent. Kountoura notified the world tourism leaders and provided details on the way Greece overcame challenges and attained tourism growth beyond every expectation.

In the event organized by the WTTC, the minister highlighted the significance of the tourism as a major driver of the Greek economy, a strong employer, and a leader in sustainable development. It should be highlighted that after Kountoura delivered her speech, the tourism ministers of Egypt and Bulgaria, Rania Al Mashat and Nikolina Angelkova, respectively, congratulated her for sharing best practices implemented in Greece, which they then applied in their own countries.

Tags: Greek tourism was informed to the world