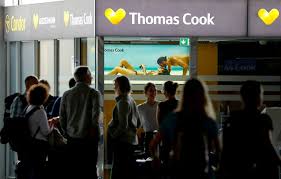 The fall of Thomas Cook has compelled governments all over Europe and Africa into making adept crisis-planning as they help with the repatriation of over 500,000 stranded tourists and begin to count the cost of the failure of the holiday company on already-battered economies.

Many of Thomas Cook’s German subsidiaries have terminated their business but at present the group’s German airline, Condor, is still continuing its operation. On Condor flights, about 240,000 people are booked to return home. However, the airline will not allow those who booked their trips through Thomas Cook. It could even get worse in Germany if Condor fails to get €200m (£176m) bridging loan from the German government.

Melisa Rodríguez, a Spanish politician and representative for Tenerife, explained that the fall down of Thomas Cook could impact the Spanish economy and the Canary Islands especially. She demanded action from Spain’s caretaker government.

In the next 15 days, about 525 Thomas Cook flights, were supposed to fly into Spanish airports with about 70% on UK-Spanish routes. Rodríguez mentioned that 30,000 people at present are stuck on the Canary Islands, 3,000 on the Balearics.

She highlighted that the fall could loss of thousands of jobs in Spain as vast swaths of the economy on Spanish islands were directly dependent on Thomas Cook package deals.

Rodríguez also said that about 4 million tourists went to the Canary Islands with Thomas Cook every year and hundreds of hotel operators could go tremendous loss, if they were not paid or paid late as a result of Thomas Cook’s insolvency.