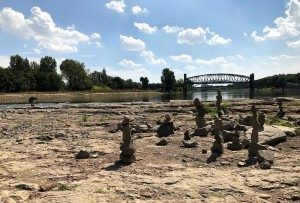 The summer heat wave in Europe this year has not only caused suffering for the locals but also revealed another type of problem for those fleeing to rivers in an attempt to cool off.

As water levels in German waterways plunge, World War II explosives have been revealed. Due to the scorching heat waves in Germany, the river dries up.

The police in the German state of Saxony-Anhalt have warned locals to be aware of undetonated World War II explosives in rivers, lakes and ponds which have appeared in the wake of the heat wave.

According to the outlet Frankfurter Allgemeine Zeitung, people have been urgently warned to not touch the decaying munitions and quickly report their findings to the police, who will alert the special services that remove or detonate them on site.

According to the latest report, after record-high temperatures in Germany dried out rivers and ponds, dozens of grenades and mines, as well as other munitions and armor have been discovered on the Elbe River in Saxony-Anhalt and Saxony.

At the end of July, authorities detonated two anti-tank mines on the Elbe.