Spain sees a drop in German and British tourists in January 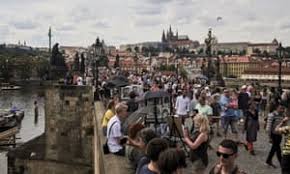 As per latest figures from the Ministry of Tourism, there is a drop in tourism from German and British tourists throughout Spain in January, and an estimated overall drop throughout the year.

This forecast will characterize the first drop in tourist figures for the first time since 2013.
During January, Spain welcomed 4.14 million foreign visitors through its borders, which is1.4% less compared to the same period in 2019.

Germany, Spain’s second biggest tourism sector dropped 4.6% to 494,000 whilst Scandinavian visitors, popular along the Costa del Sol, dropped hugely by 9.6%.
However, there are certain countries that have also seen a remarkable increase.
American tourists have seen a 20% increase and the French are up 7.7%.

By region, Andalucia remains a popular destination by exhibiting a small increase of 4%, whereas the Costa Calida, Valencia and Madrid fall into the 0.1% increase category.

Most surprising is the Balearics which exhibited a decrease of 26.8%, which is expected to worry local governments across the region.

The figures exhibit that the UK market represents a major player in Spanish tourism, in spite of the reduction in figures.