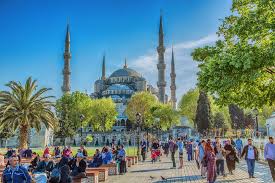 As said by a tourism company, Turkey’s tourism industry, the key pillar of the country’s economy, could struggle to meet visitor and revenue targets in the forthcoming years after two new taxes inflicted and sharp increases in costs continue to pressurize businesses,.

Costs, as pointed out by the industry have surged 35% in 2018, along with the new taxes that will be reflected in prices could compel Turkey to lose customers to other Mediterranean countries.

For Turkey, tourism is a major source of income. It suffered a downturn in 2016-2017 after a coup endeavor and a disagreement with Russia. However, it returned to 40 million tourists in 2018.

In September, the government introduced a tourism strategy that includes a 150% hike in tourism advertising funds to $180 million in 2020. A part of that will be paid by tourism companies to the recently set up Tourism Promotion and Development Agency. Hotels will pay 0.75% of their total revenues.

Besides, Turkey also passed tax regulations in 2019, introducing an accommodation tax, to be set at 1% until end-2020 and later be increased to 2%.