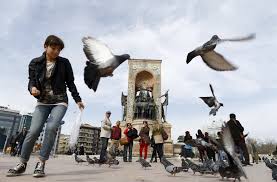 The jointly declared tourism year in Turkey and Russia has raised hopes for Turkish tourism professionals to expand sectoral cooperation with their Russian counterparts.

In pursuit of this goal Turkish tourism professionals are now preparing for the Turkey Festival to be held in Moscow in June. Incidentally, Turkey is the top destination for Russian tourists. Nearly six million Russians visited the country last year, mainly to the Turkish resort town of Antalya.

In the first two months of this year, Turkey welcomed 179,461 Russian tourists and the figure corresponded to an increase of nearly 34 per cent compared to the same period in 2018. The festival is being organized under the auspices of the Tourism and Culture Ministry and in coordination with the Turkish Hotels Federation (TÜROFED), TÜRSAB and the Turkey Tourism Investors Association (TTYD).

Turkish Travel Agencies Association (TÜRSAB) Chairman Firuz Bağlıkaya underscored that the Turkey Festival in Moscow, which will be inaugurated on June 14, is a great opportunity to increase the number of Russian tourists and tourism revenues.