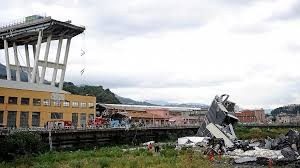 At least 39 people were killed when one kilometer long motorable link, Genoa’s Morandi Bridge collapsed during a violent storm on Tuesday. The flags on the municipal buildings of Genoa flew at half-staff and Pope Francis, speaking 300 miles away at the Vatican, offered his prayers for the victims.

One person has been pulled out alive from the debris under the bridge and is being transported to hospital by helicopter. At least 10 vehicles were involved in the collapse.

The local officials say that they are taking data from people whose friends or relatives are missing, but that they do not yet know how many cars exactly were on the bridge when it collapsed and cannot extrapolate how many people might be buried in the rubble.

The collapsed Morandi Bridge also known as northern Italy’s Brooklyn Bridge was a section of the A10 motorway, near the city center. The collapse took place as torrential rain fell in the region. The bridge was around 100 meters (328 feet) tall, according to Italian media, and crossed over railway tracks and some buildings. The reports said that a number of cars were on the bridge when it collapsed.

Italian Interior Minister Matteo Salvini said that the search is continuing for people under the rubble of the collapsed bridge in Genoa, but he has declined to say how many people are feared missing. The Italian Cabinet has approved a 12-month state of emergency for Genoa after this architectural disaster. Italian Prime Minister Giuseppe Conte also allocated €5 million for the rescue and evacuation operations.

The bridge was built in the 1960s, and restructuring work was carried out on the bridge in 2016. Italian Premier Giuseppe Conte said that his government won’t wait until prosecutors finish investigating the deadly bridge collapse to pull the concession from the main private company that maintains Italy’s highways. Italy’s infrastructure minister said that the apartment buildings might have to be destroyed because of the Genoa highway bridge collapse. About 630 people live in apartment buildings practically under or right next to part of the highway bridge that was left standing after Tuesday’s collapse. By Wednesday, they all had been evacuated by authorities.

Now the usual political inferno flared up, with parties accusing one another as the government blamed it all on the highway service provider. Modern infrastructure is vital to any development and safety, yet it appears not to be a top priority in Italy.