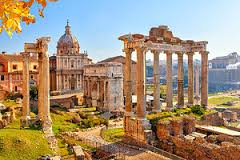 According to the Mastercard Global Destinations Cities Index, Rome attracts 7.1 million tourists every year and it is the 16th most visited city.

It attracts less than a third of the 21.5 million visitors to Bangkok (considered as the top-ranked destination) every year while Dubai stands fourth. Rome ranks after Kuala Lumpur, Amsterdam and Seoul.

Rome is densely packed and is full rich cultural and historical sites which includes the Colosseum and the Pantheon.

Marco Brogna, president of the economics of tourism program at Rome’s La Sapienza University the cities ranking higher than Rome are compelling in their own way and Rome lacks behind in selling itself. According to him when people visit Rome, they think of the city as being inhospitable, dangerous and dirty instead of focusing on the Renaissance artwork or its architectural wonders.

According to data by the United Nations World Tourism Organization, France, the United States, Spain  and China attracts more tourists than Italy.

Thirty years back, Italy was on a top destination in the world for travellers but now it is grappling  with its  sinking numbers.

In the 1980s and 1990s  the problem with Italy started and it was slower than other countries to attract tourist but in 2001 there was  plan to decentralize the governmental decision. The regional government spurred the problem as most of the regions had poor promoters and there were little collaboration between different cities.

He further mentioned that  the convention being Italy was so beautiful and had so much to offer that it was able to sell itself. But that was not the case.

Andrea Giuricin, a management professor and a transport and tourism analyst with Confturismo, an industry group, the problem amplified in along the north-south divide that splits the country in an economic and cultural way.