Italian Exhibition Group Strengthens ITS Growth As at 30 September 2018 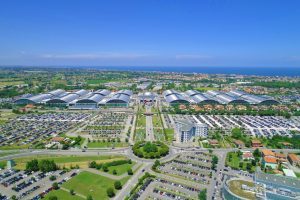 At the press conference today, Italian Exhibition Group (IEG) communicated its results as at 30th September 2018.

The figures, regarding the Group’s consolidated financial statement, show a total revenue of 111.8 million euros, an increase of 22% on the same period of the previous year (91.7 million as at 30th September 2017).

The operating results were also positive and, as far as EBITDA1 is concerned, show a value of 22.3 million euros (compared to the 16.5 million at the end of Q3 2017), while at EBIT level they stand at 14.2 million (compared to 9.4 million as at 30th September of the previous year).

The comparison with the figures of the previous year must take into consideration some changes in the corporate structure (in March 2018, FB International Inc. became part of the IEG group, as did Prostand and Colorcom from September 2018, all companies trading in the stand fitting sector) and the absence, in 2018, of two important expos which were held in the first half of 2017 (A.B. Tech Expo in Rimini, held every three years, and Koinè in Vicenza, held every two) and, on the other hand, the presence in the third quarter of 2018 of the biennial Tecnargilla expo.

On the basis of the results achieved and forecasts regarding activities scheduled for coming weeks, the Company’s management confirms its forecast of fully achieving the growth and profitability targets foreseen by the budget of the current year.