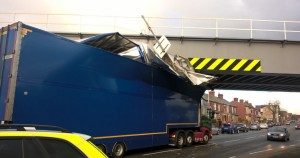 We have aimed our new campaign, Lorries Can’t Limbo, directly at HGV drivers and others who drive high-sided vehicles. It encourages drivers to “wise up and size up” their vehicle and plan their route before they head out on their journey.

The campaign follows the shocking admission that 43 per cent of drivers do not check the height of their vehicles before heading out. More than half said they did not take low bridges into account when planning their journeys.

Each year there are an average of 2,000 railway bridge strikes, with each costing more than £10,000 for repairs and compensation to train operators for delays caused.

Compensation costs Network Rail up to £13m a year but the true annual cost is estimated to be up to £23m, once the value of undelivered goods, lost productivity from train delays and road congestion are taken into account.

“However, bridge strikes are not always front and centre and drivers often need to be challenged to consider them, especially outside the confines of their regular depots or destinations.

“We want to work with drivers and support them to help them be as prepared when they are out on the road and we wanted to develop something that the industry could continue to use and will be of benefit to them.”