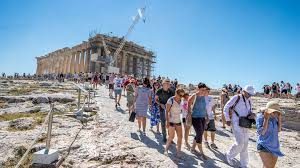 Tourism, which accounts for about 25 per cent of Greece’s gross domestic product, is expected to grow in 2020 despite the blow dealt to the sector last year by the collapse of British travel giant Thomas Cook, the country’s Tourism Minister Harry Theocharis said on Thursday.

Greece is emerging from a decade-long debt crisis and relying on its resorts, beaches, and ancient monuments to attract strong visitor numbers if it is to fully recover. Tourism employs roughly one in five Greeks. Revenues in 2019 grew an estimated 12-15 per cent from about 16 billion euros in 2018 on the back of a four per cent to five per cent rise in arrivals, Theocharis said in an interview to the media.

About 33 million tourists visited Greece in 2018, the year the country exited its third international bailout. The collapse of Thomas Cook in September left thousands of holidaymakers stranded at island resorts and dealt a significant blow to Greek hoteliers and businesses.

The impact was initially estimated at 500 million euros ($555 million) and was seen spilling over to 2020, an immediate worry for the conservative government that took office in July. But the sector has found new contracts and replaced the lost slots, Theocharis said, adding, “despite the ups and downs, the surprises and the hurdles, 2019 rewarded us with a positive result”.

“We are in a position to envision a new year with optimism that Thomas Cook has not left its mark,” he said. “We expect 2020 will be better than in 2019.” Greece’s target for 2020 and the years to come is an annual one-digit rise in arrivals and a two-digit increase in revenue, said Theocharis, who headed revenue collection at the country’s finance ministry at the peak of the crisis in 2013-14.

The government has been mulling changes to the sector ranging from further regulating the home-sharing market to opening up the industry to sea diving tourism, which is currently restricted because of the many archaeological ruins in Greek waters. The sector is still vulnerable to risks outside the government’s control such as a recession in Europe or turmoil in the Middle East, Theocharis said. Climate change is a long-term challenge, he said, and Greece is studying its estimated impact.