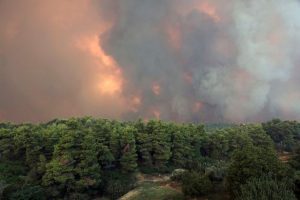 Holidaymakers to Greece have been alerted to ‘stay indoors’ as wildfires envelope the holiday destination. The blazes are particularly affecting the Psachna area of the island of Evia, north of Athens. The U.K. Foreign Office has issued new advice for travellers and expats in the affected regions as the Greek authorities have issued a level 5 red alert for the island of Elafonisos in the Pelaponessus region of Greece.

Today, the FCO updated Travel advice for Britons and stated: “Information on wildfires that are ongoing in the Psachna area of the island of Evia (north of Athens) and in the Corianthiakos Bay area of Thiva (north-west of Athens) – is smoke from the fire on Evia is also affecting Athens.

Greece has been hit with a blaze of forest fires and travellers are being urged to “remain indoors and switch off air conditioning”. The warnings to remain indoors even extend as far as Athens – despite the initial blazes starting in the Psachna region.

Greek authorities so far have been forced to evacuate tourists from the island of Elafonisos as a powerful wildfire spread from a landfill site. Strong winds then pushed it through the island as the terrifying scenes unfolded.

The update to the official government travel website says: “A wildfire in Illea region, Manolada has meant that the National road between Payras and Pyrgos has been closed. British Nationals in the area should follow the advice of Greek authorities and monitor the website of the General Secretariat for Civil Protection”.