Experts warn after Mont Blanc on brink of collapse 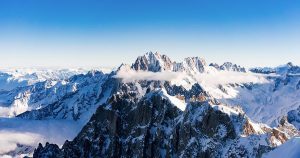 Italian officials have closed off roads and have ordered to evacuate mountain huts after experts warned that a portion of the Mont Blanc glacier might collapse.

Around 250,000 cubic metres of ice are in danger of breaking away from the Planpincieux glacier on the Grandes Jorasses peak. The mayor of Courmayeur, Stefano Miserocchi, ordered for taking safety precautions after experts warned that the glacier was sliding at speeds of 50-60 cm per day. Miserocchi said that the global warming was the reason behind this.

“The mountain is going through a major change due to climate factors and, thus, it is particularly vulnerable,” said Miserocchi.

Mont Blank is the highest mountain range in the Western Europe. With 11 peaks above 4,000 metre in France and Italy, it attracts thousands of tourists on a yearly basis.

The mayor brought out a notice on Saturday in which he ordered for the closure of roads in the Val Ferret on the Italian side of Mont Blanc, after experts warned that a portion of the Mont Blanc was sliding. As per the mayor, the residential areas are not going to be affected by this but mountain huts in the Rochefort area were being evacuated as part of the precautionary measure.

Experts are finding it hard to predict when the mass of ice would collapse. The Planpincieux glacier is being closely monitored since 2013 with an aim to find out the melting ratio of the ice. Earlier in one weather-related incident in August 2018, an elderly couple was killed near Planpincieux in Courmayeur when their car was swept away from a road due to landslide.

Worth mentioning here that the Mont Blanc glacier news is coming at a time when a new UN report is set to outline the impact of climate change on the world’s oceans. A special report from the Intergovernmental Panel on Climate Change has also come out on Wednesday. The report examines the oceans, coasts and cryosphere and it stresses on the increase in flooding damage, melting ice caps and glaciers and ocean heatwaves killing coral.