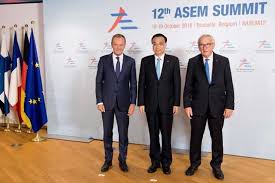 To quote President Jean-Claude Juncker at the plenary session this morning at the Summit, “We want to give our relationship with Asia, which is already very dynamic – as illustrated by the numerous trade and cooperation agreements we have, fresh impetus. Only a multilateral approach will enable us to confront global challenges. This is why I reiterate our commitment to support multilateral organisations in all their efforts, including the United Nations and the World Trade Organisation – a World Trade Organisation that we have to reform together, so that its rules correspond better to the new realities. It is by acting together that we will be able to preserve our planet […], contribute to resolving conflicts, eradicate poverty, reduce inequalities, […] and that we can better manage migration flows and develop free and fair trade.”

“What Europe and Asia agree together matters not only for the two of us, but for the entire world. Together we represent 55% of global trade, 60% of global population, 65% of global economy and 75% of global tourism; together we represent a real global power”, said the High Representative/Vice-President, Federica Mogherini at the Summit’s press conference. “We come out of this two-day Summit with a reinforced global partnership between Europe and Asia. It has allowed us to translate our global weight into concrete policy initiatives – on regional and international security, foreign policy issues, climate change action, free and fair trade, and the digital agenda to name a few. Together, we can make a real difference for the world.”