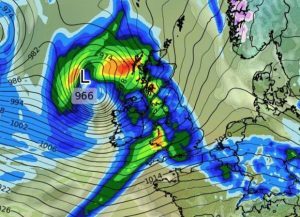 The Met Office in U.K. has issued ‘Danger to life’ storm warning as two storm systems are about to hit Britain this week.

A yellow ‘be aware’ weather alert warning of ‘very strong winds’ that can reach up to 80mph in some places on Friday has been issued.

The first storm system is Storm Etienne, while the other one is yet to be named. They will bring torrential rain and powerful winds to the nation.

It is expected that some parts of Britain will be blanketed by up to eight inches of snow leading to freefall of temperatures.

On Tuesday evening, it is forecasted that the Storm Etienne will merge with cold air from the north, causing wintry showers across Wales and England.

A blast of freezing weather from the Arctic will lead to sub-zero nighttime temperatures. It will unleash up to 20cm (7.8 inches) of snow over higher ground this week, according to the Met Office.

Flying debris due to strong winds will reach 80 mph in places causing ‘danger to life’ in some cases, according to Met Office advice.

As per the Met Office the following three weeks until Christmas will see repeated Atlantic gale winds and travel disruption.