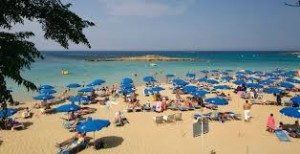 According to data released by Cystat on Wednesday, revenue from tourism fell year-on-year in April but showed an overall increase in the first quarter of 2018.