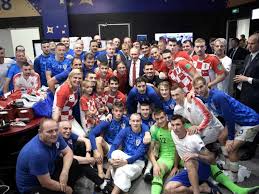 The Croatian football team’s unexpected success in Russia will strengthen Croatia as a brand, said Maja Vrataric, a PR expert from Grizli agency.

“The World Cup finals on Sunday were broadcasted in every country of the world, which means a lot for our country’s visibility,” Vrataric said.

After the match between Russia and Croatia, global websites used the word “Croatia” three times more than in the last three years. On the day of the match with Russia, Croatia was mentioned in the foreign media no less than 118,482 times.

On Sunday, i.e. the day of the final match, the website of the Croatian Tourist Board, HTZ, recorded an increase in visits of more than 200 per cent compared to the same period last year.

Experts claim that sporting success in Russia could have a major impact on the Croatian economy, since the internet is now the main tool for picking travel destinations.

“Social networks are overwhelmed with support messages, red-and-white checkerboards, and the Croatian flag has never had so much visibility,” Vrataric said.

Vrataric said that Croatian football players have recognized the impact of their private social networks, and have opened new official profiles, recording live videos from hotels and even buses, also sending messages to their fans.

The HTZ has made a special video, in which the Croatian players invite tourists to see many interesting but lesser known places in Croatia. The video has already been seen by more than 2.5 million people.

Croatian Tourist Board chief Kristijan Stanicic said on Monday in HTZ’s press release that Croatia might not have won the World Cup, but it certainly won the world.

“We are proud of our players and thank them immensely. Again, they proved that they are the best ambassadors of Croatian tourism,” Stanicic said.