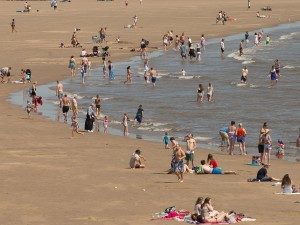 This year, continuous sweltering heat waves have claimed 1,000 more deaths than average since its start. But in some parts of Europe, recieve thunderstorms which is cooling down the heat wave.

According to new figures from the Office for National Statistic the scorching heat waves make the rapid decline of travel and tourism in UK.  The deaths were up in all seven weeks from June 2 to July 20 adding up to an ‘extra’ 995 deaths in a summer that has been hotter than 1976.

The Public Health England’s Heatwave Plan for England said that there is strong evidence that excess summer deaths are indeed ‘extra’ and are the result of heat-related conditions. The campaigners say the death toll could be higher than during the 38.5C heat wave of 2003 when 2,139 people died in the UK.

The extreme weather condition is set to continue. The mercury was expected to climb to 45 degree C in some parts of Portugal on Sunday, but would not go above the 46.8C recorded the day before in Alvega, 93 miles north of Lisbon, the Portuguese Institute for Sea and Atmosphere said.

The temperature records in several cities were broken on Saturday, but none reached the nationwide record of 47.3C in the southern village of Amareleja in 2003. However a forest fire continued to rage on two fronts in Monchique in the country’s south on Sunday.

Nearly 780 firefighters, supported by 200 vehicles and 10 water-dropping planes and helicopters were working to put it out, the civil protection agency said. The heat, wind and difficulty in accessing some areas has complicated efforts to bring the fire under control, and a hundred people have been evacuated as a precaution. Another forest fire, in central Estremoz, has left six people wounded, two in serious conditions.

A top of 42 degree C was forecast in the southwest region of Extremadura on Sunday, where a wildfire in San Vicente de Alcantara has been brought under control by firefighters, the local fire service said. The mercury had reached 44 degree C in the country’s south on Saturday, the Spanish Meteorological Agency said. The rise in temperatures has already claimed the lives of three people who died of heatstroke this week.

In France, 67 out of 101 departments were on heat wave alert with temperatures in the south of the country expected to again peak near 40C. Saturday was the hottest day in the country since the infamous heatwave of 2003, in which thousands of people died, many of them elderly people living on their own.

The emergency services complained that, despite public health warnings about keeping cool and hydrated, there was ‘still quite a lot of recklessness’. They cited the example of an elderly man in Lyon who suffered heart problems while mowing his lawn under the merciless afternoon sun. Four nuclear reactors remained closed Sunday over the blazing temperatures.

But some of the areas receive thunderstorms which cool down the hot weather. Several thunderstorms flooded streets in Sicily and Sardinia in the south of Italy on Sunday, cooling down heat wave that has caused traffic problems on the country’s busiest summer weekend on the roads. Tourists on the Italian island of Pantelleria, near Tunisia, said they had seen a tornado off the coast on Saturday. Media had previously reported on Saturday that a woman had died from apparent heatstroke on a beach in the northwestern Liguria region. Some areas of Europe is receiving isolated showers and thunderstorms which brought some relief from the heat in parts of Germany this weekend, particularly in the south. However temperatures are expected to climb again to as high as 39C in the east on Wednesday. Sweltering Germans have been flocking to open air swimming pools across the country, and many pools are expecting record visitor numbers this summer.