Chinese tourists double in Europe during the first half of 2018 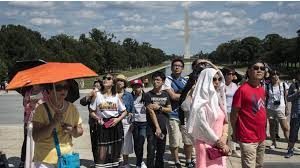 In the first half of this year, Chinese tourists almost doubled their travels to Europe, compared to the same period last year.

This was one of the key findings of the “China-Europe Tourism Big Data Report for the First Half of 2018” released by China Tourism Academy CTA.

According to the data centre of China’s Ministry of Culture and Tourism, 71.31 million Chinese travelled abroad in the first half of 2018.

With the promotion of China-Europe tourism cooperation under the framework of the 2018 “China- Europe Tourist Year”, Chinese tourists had greater benefits in terms of visas and flights, which boosted trips to Europe.

To quote Chinese Tourism Academy president Dai Bin., “Under the framework of cooperation, bilateral tourism exchanges we are facing the finest historical period. As the second largest destination region for Chinese citizens traveling overseas, it is hoped that Europe is not only important for Chinese tourists, but also friendly.”

The World Cup fuelled an increase in outbound tourism to Europe last summer and traditional tourism witnessed a rise in popularity during the off-season as well.

The World Cup brought an increase in Europe-bound tours from China during the summer. The number of people booking Europe tours in the second quarter of 2018 increased by more than 100% on year-on-year basis, and by 94% on quarter-on-quarter basis.

In terms of travel methods, package tours are still very popular; however, the number of Chinese tourists going to Europe on their own is also increasing.