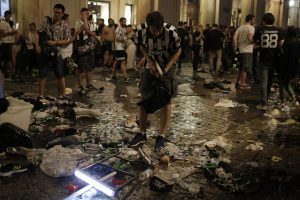 A stampede in a nightclub in Italy killed at least six people and more than 100 people injured, out of which 10 of them are seriously injured.

The officials say that the incident took place place near the eastern coastal city of Ancona. Some reports say there was panic after pepper spray was fired inside the club in the town of Corinaldo.

The Lanterna Azzurra club was hosting a concert by rapper Sfera Ebbasta and up to 1,000 people were thought to be inside.

The incident took place at around 01:00 (midnight GMT) as Italy began celebrating the Feast of the Immaculate Conception. The injured have been taken to hospitals in Senigallia and Ancona. Many of the injured suffered crushing wounds.

Sfera Ebbasta is the stage name of 26-year-old Gionata Boschetti, who has achieved significant commercial success in Italy.

He released his third studio album – Rockstar – in January and it has been certified as a triple platinum seller by the Italian musical federation. In June last year about 1,500 people were injured in Turin after a firecracker sparked a stampede at a public screening of the Champions League final.