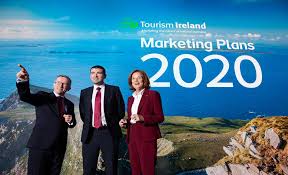 On Monday, Tourism Ireland declared that it all geared up to perk up its foreign visitor numbers to the island of Ireland to 12 million by the year 2022.

In the meantime, it also expects to grow its foreign tourism revenue to 6.54 billion euros (about 7.25 billion U.S. dollars) in the coming three years.

At an event attended by 500 tourism industry leaders all through the country, plans were divulged. While speaking at the event, Niall Gibbons, chief executive of Tourism Ireland, said that “In 2019 we’ve seen a continuing weak trend in Irish tourism.”

In 2019, Tourism Ireland forecasted that the revenue churned out by international visitors to the island of Ireland will decline to 5.78 billion euros from 2018’s 6.1 billion euros as the number of foreign tourists will remain almost at 2018’s level of 11.2 million.

To attain its growth targets, Tourism Ireland will soon be introducing several marketing measures like added focus on less visited attractions and locations on the island of Ireland and revamping its Ireland.com website. This website annually attracts more than 20 million viewers.

To help in the development of tourism, the Irish government has risen its funding to 186 million euros for 2020, up 10 percent from this year, said Brendan Griffin, Irish Minister of State for Tourism and Sport, who also attended the Monday event.

Tourism Ireland is funded jointly by the Irish government and the government of Northern Ireland to promote the island of Ireland overseas as a leading tourist destination.