As tourism in the UK & Europe softens, Burberry announces sales 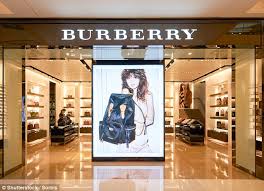 Burberry Group PLC (LON:BRBY) disclosed the flat first quarter retail revenue as development in the Asia Pacific and Americas was counterbalanced by frail demand in tourism in the UK and Europe.

In 13 weeks to June 30, the luxury fashion brand explained that it churned out retail revenue of £479mln in comparison to £478mln a year back. Comparable sales increased 3% in the period, easing back from the 4% increase reported the same time in 2017.

Tourism spending became softer in the UK and Europe after a series of terrorist attacks as the Middle East remained weak due to “macro-economic factors”.

The company left its guidance for the full year unchanged and stated that it is on track to bring cumulative cost savings of £100mln.

Burberry is all set to bring some key changes to its management team and product ranges.
Burberry in March named Givenchy designer Riccardo Tisci as its new chief creative officer to put back Christopher Bailey.

Tisci’s appointment at the company, which is best known for its classic trenchcoats, came as a shock to the fashion world as he is known for his edgier creations during his 12 years at Givenchy such as shark teeth and nose ring motifs.