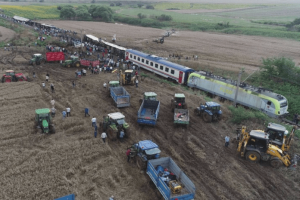 At least 24 civilians were killed and 124 injured Sunday after a passenger train derailed in the northwestern Turkish province of Tekirdağ. Tekirdağ is a historically nourished region in Turkey after Anatolia.

The Deputy Prime Minister Recep Akdağ said that the search for the missing passengers and rescue operations in the region have been completed as of 6 a.m. local time.

The Minister of Transport, Maritime Affairs, and Communications Ahmet Arslan said during the same meeting that routine controls on train rails, which have to be done once a year, were conducted in April.

The Ministry of Transport also said five carriages of the train’s six cars, with 362 people on board, traveling from Uzunköprü, Edirne to Istanbul were toppled near Sarılar village of Tekirdağ’s Çorlu district after the railway track slid down from its original spot due to torrential rains.

The Tekirdağ governor Mehmet Ceylan said injured people have been evacuated from the scene of the accident with helicopters.

There are over 100 ambulances sent to the scene, TRT Haber said, quoting Health Ministry Undersecretary Eyüp Gümüş. The Turkish army said in a statement that it had also sent helicopters to the scene.

The President Recep Tayyip Erdoğan and Prime Minister Binali Yıldırım offered their deep condolences to the victims’ families after being briefed about the accident.