Portugal and Spain agree to stop tourism across their 1,200-kilometer shared border 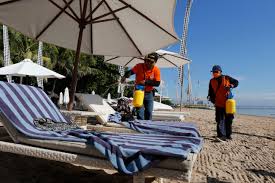 Portugal and Spain have agreed to stop tourism across their 1,200-kilometer shared border beginning from Monday, but they will still allow workers to commute as well as the exchange of goods across the land border, said Portuguese Prime Minister Antonio Costa.

Costa said that the measure was decided after a call with Spanish Prime Minister Pedro Sanchez. Portugal witnessed a spike in infections last week, from zero to 245, although the situation is far less serious compared to neighboring Spain. There have been no deaths recorded in Portugal.

In a video statement, President Marcelo Rebelo de Sousa said that he’s convening the Council of State on Wednesday to discuss if a state of emergency would be required to halt the spread of the virus.

Rebelo de Sousa has been in self-isolation since earlier this week, in spite of having tested negative for COVID-19, after he met a student who later was found infected with the virus.